It was a crisp and cool morning aboard Yacht Isabela II as our ship headed south from Isabela Island towards Fernandina Island, another great place to experience unique moments in the Galapagos.  We had just spent the previous day over at Punta Vicente Roca and were now headed south to Punta Espinosa visitor site. Our passengers emerged from their cabins and headed out to the bow of the ship under an overcast sky, wearing jackets and sweaters to ward off the mild chill in the air. 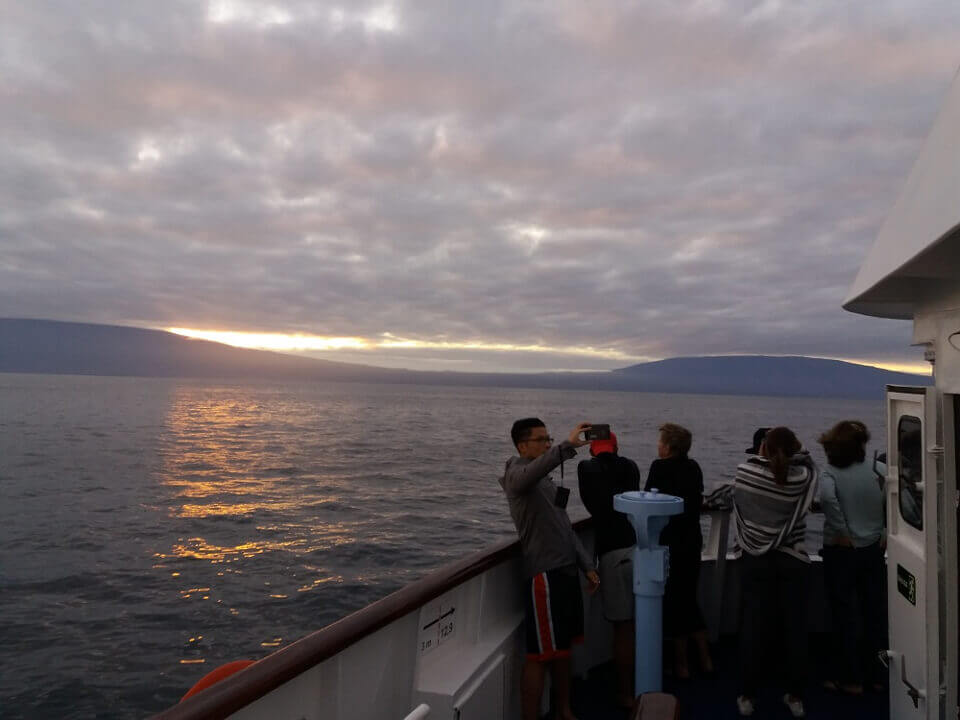 It was a little past 6 a.m. when the sun started to creep over Wolf Volcano, casting a warm glow over and around its slopes, highlighting the majestic silhouette of the highest peak in the Galapagos. This volcano actually erupted not too long ago, back in May of 2015. It had been inactive for around 30 years, and fortunately the lava that flowed down its sides didn’t harm the pink land iguana population. Though there has been recent volcanic activity in other islands of the Galapagos. 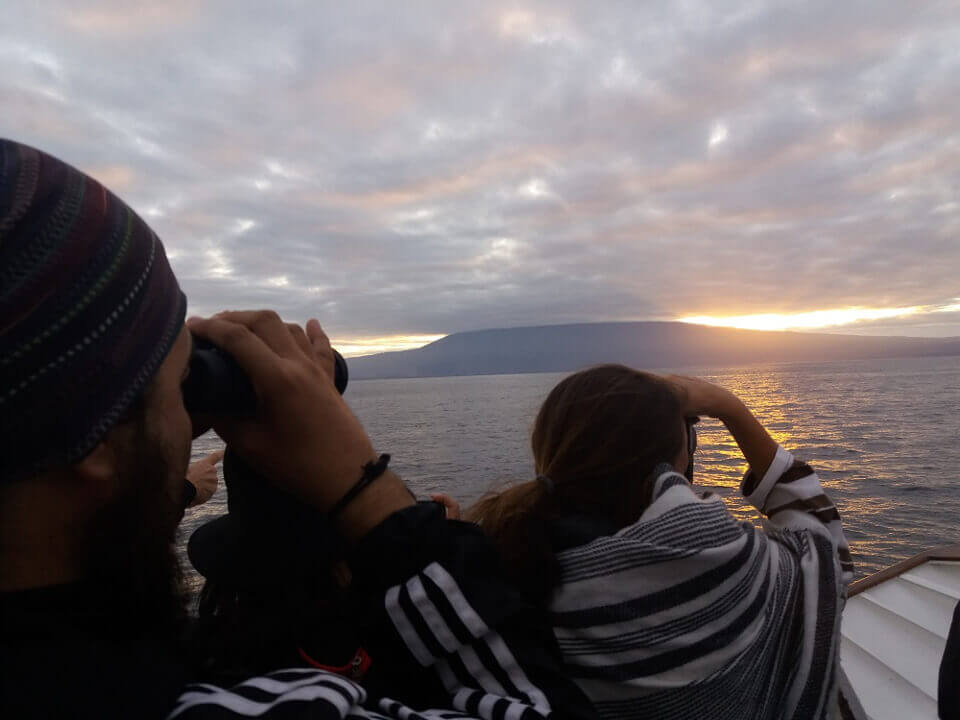 Sunrise view from the Galapagos islands

A Warm and Pleasant Pre-Breakfast

As our group of passengers huddled up against the railing of the ship, snapping pictures of the unraveling sunrise, our kitchen crew, and the hotel staff was one step ahead of the whole event and brought up hot chocolate, cinnamon bread and pan de yuca (manioc rolls). Our guests were delighted with the small treat and happily nursed their comforting beverages and sweets as the rising light filled them with warmth. 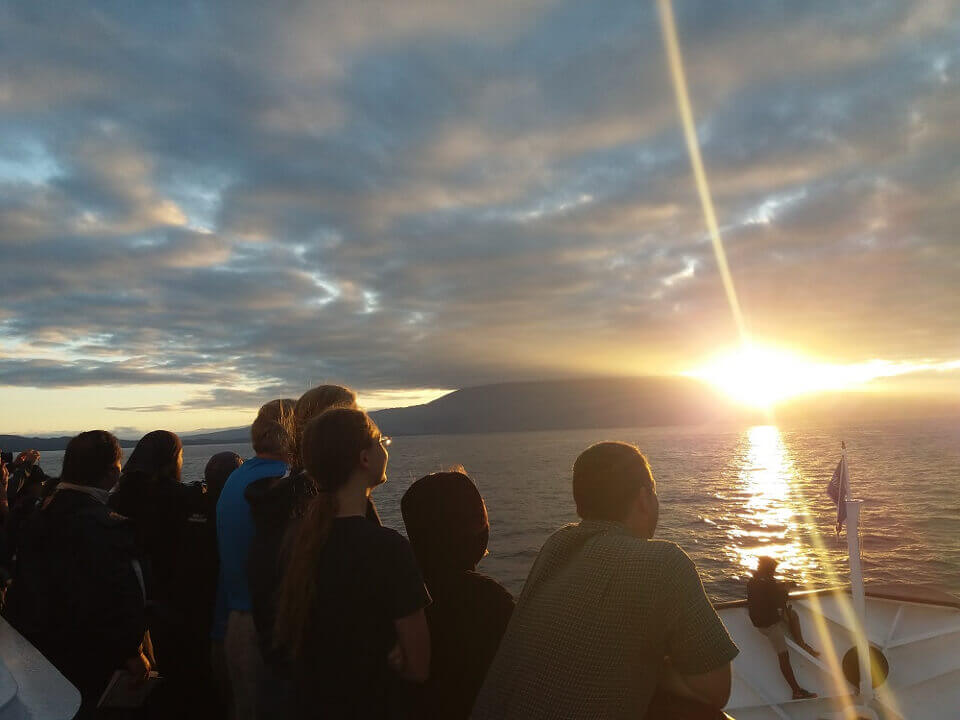 And as the cherry on top of this whole experience? A pod of whales emerging from the depths of the Galapagos waters. To be specific, they were Pilot Whales, which was easy to make out thanks in large part to their rounded, bulbous heads and a dorsal fin that’s situated a little more towards the front than most other whales. 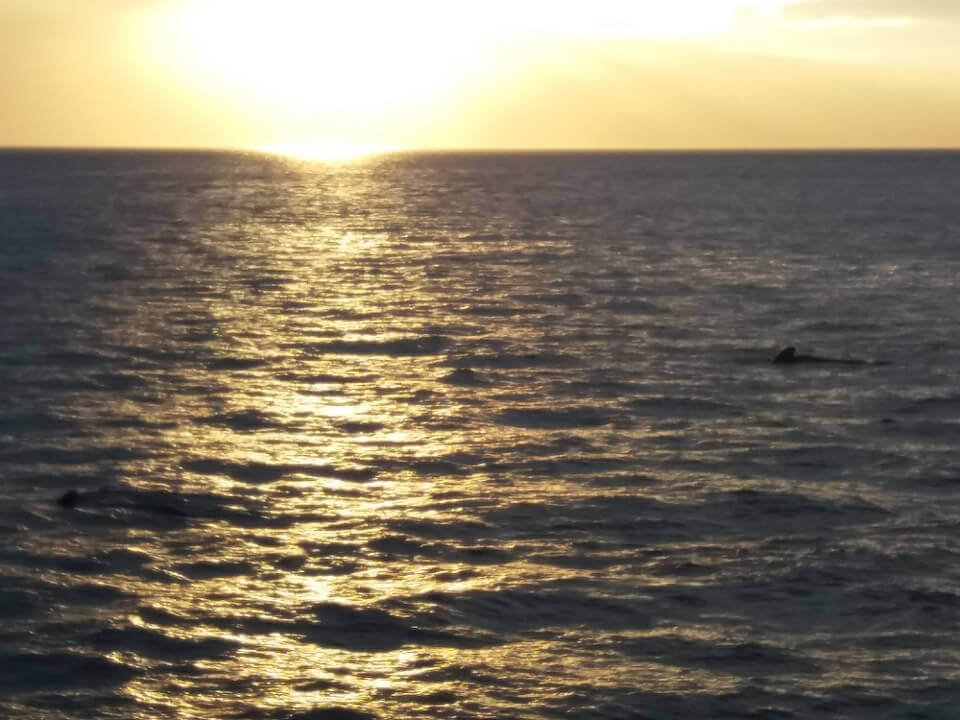 We watched them in awe, at a distance of about 50 meters (roughly 150 feet) that was not all that far away from our boat. And just when we thought the sunrise couldn’t get any better, a group of dolphins appeared not that far from where the whales had initially emerged. Dolphins in the Galapagos are a beautiful sight given their playful nature and curiosity, oftentimes approaching ships to check us out with equal enthusiasm. Their appearance made for a grand combination of spectacles as we traveled southwards.

Early Morning Whale Watching in Galapagos: Like Nothing Else

Our guests were absolutely delighted to experience whale watching in Galapagos within just a matter of days of being in the Galapagos. Often times, in a place as enchanting as this, expecting the unexpected is the best way to go about each excursion. By the time our aquatic friends had left, the sun had gone up into the blanket of clouds over us, casting this beautiful, golden fan of light that stretched out from beyond the horizon. We all stood in complete awe and gratitude as we began our day perfectly stunned, impressed, and energized with everything we had just seen, tasted, and experienced.