It’s that time of the year when American flamingos in Galapagos tend to start looking for a mate! During the tail-end of this hot season, conditions become optimal for American flamingos to pair up and raise their offspring as a team. With their incredibly vivid and fluorescent plumage, the pink hues of the American flamingo in Galapagos never fail to mesmerize each and every visitor that lays their eyes on them. Add to this the fact that the American flamingo in Galapagos is the only species of their kind located this far to the southwest, and they become quite a spectacle, actually forming a part of our BIG15 list of iconic species. In this blog we invite you to take a closer look at how these beautifully-colored birds manage to swoon the opposite sex with some rather unusual methods.

The American flamingos are one of the most iconic species of the Galapagos Islands, spot them in their natural habitat with Yacht Isabela II’s tours! 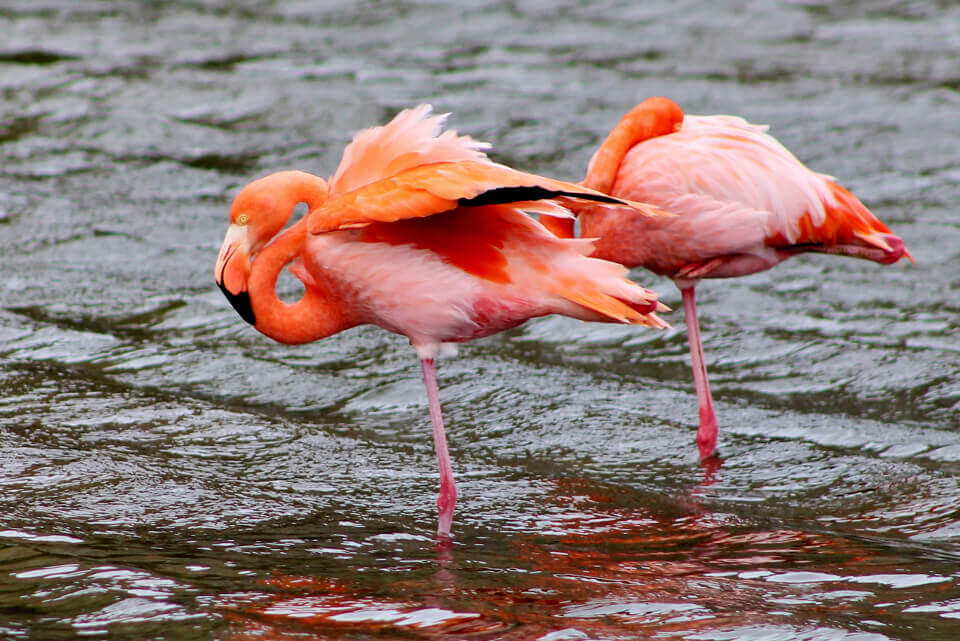 Flamingos can be found all around the Galapagos islands

Flamingo Courtship in Galapagos: How do flamingos mate?

Rainfall is key in triggering the American flamingo’s desire to mate. Wetter weather brings in two things that are very dear to the flamingos: it provides them with supplies for building their nests and also increases the amount of food they have to feed their offspring with. 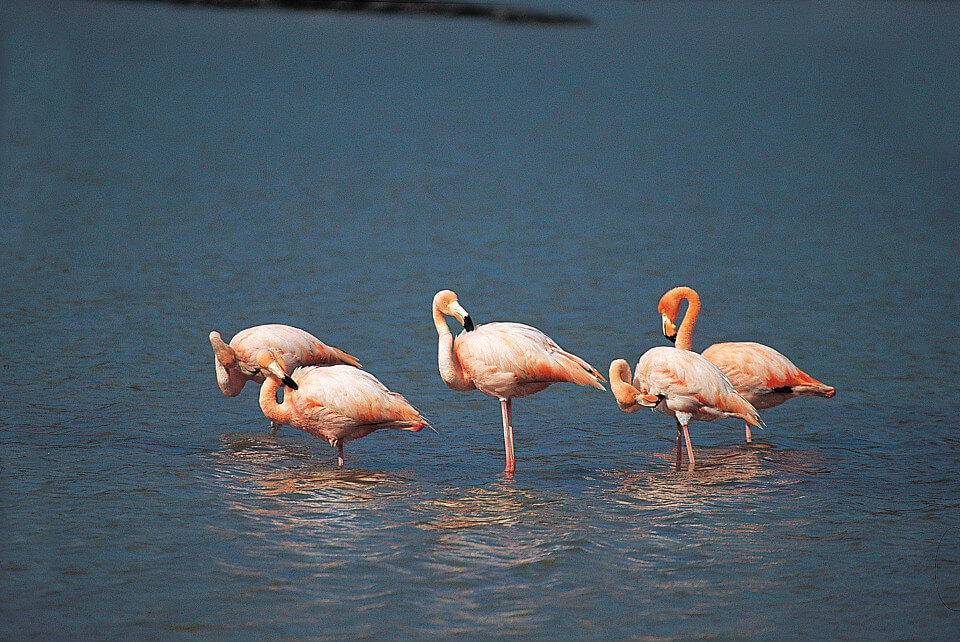 These favorable conditions are just starting to arrive during this month of August, and the show that ensues, as a result, tends to be rather amusing. The thing is, despite males being monogamous when they find a mate, American flamingos are such sociable birds that the entire colony takes part in the courtship rituals. This involves the entire group of males parading/marching around the females and participating in an intricate dance that involves cocking their necks up and down while flashing their primary feathers (found at the tips of their wings) to exhibit the most vivid colors of their plumage. Any flamingo over the age of 6 years is privy to such an act of courtship.

Nest Up & Work Together!

American flamingo nests typically take on a conical form, oftentimes looking like a small volcano (about 1 ft / 0.3 m tall) made out of sticks, mud and possibly even feathers. Their nest is a collaborative effort, and both the female and male flamingo share the duty of scavenging for resources to build their nest with. The female eventually lays an only egg, and both parents take turns incubating it over the course of about a month before the chick hatches. Once they emerge from their shell, the baby flamingos will don not pink but white feathers (the special color will come later in life, thanks in large part to the diet they will have).

Offspring will stay in the nest for about a week under the constant care of their own parents, who will take turns feeding their chick a special type of milk that’s produced in their upper digestive system. This special milk is rich in fat and protein and will allow the baby flamingo to quickly join the colony and partake in the fascinating ways of the American flamingo in the Galapagos.

Luckily, the young ones and parents don’t have to stress out too much about keeping an eye on each other, as the absence of predators in the Galapagos makes their lives almost utopian when it comes to tranquility and peace. There is no migration period as most of the birds in the Galapagos stay there throughout their whole lives. All they need to do is frolic and play – the perfect set of fascinating behavioral patterns for visitors to observe.