Volcanic activity is what explains the origin of the Galapagos Islands

In recent years, our planet has gone through incredible volcanic eruptions. Some major, some minor. All of these eruptions manage to reflect the basic instincts of our home, Planet Earth – a great and dynamic piece of rock that’s changing constantly, violently, and quietly, all at once. And yet us humans hardly ever even notice these changes. Perhaps Sir Charles Lyell (1797-1875), the father of Geology, had the courage to talk about the changes our planet faces in what he referred to as our “uniformitarian” world. His masterpiece, “Principles of Geology,” is existing proof that the concept of physical change across our planet is a rather new concept to humankind. The Galapagos Islands are no exception to the ever-changing surface of our world, as past and present volcanic activity continues to change the shape and form of this highly unique destination.

How are Galapagos insular volcanos different from volcanos along the Andes? 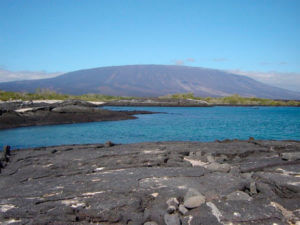 What is true about Galapagos’ insular volcanos is that they’ve never been connected to nor touched the mainland. That means that these volcanos emerged in the middle of the ocean. Now, keep in mind that there are two essential explanations for the differences seen between mainland volcanos and island volcanos: a.) their magma chamber (the area where molten rock resides) holds a different shape and therefore, oozing magma behaves differently and b.) there difference in the chemical composition of the magma, its dissolved gases, pressure content, etc. Galapagos volcanos belong to a group called insular volcanos, and their shape (when young) has the shape of an upside-down saucer dish (more-or-less like a dome). 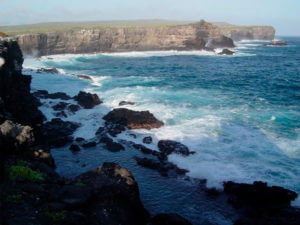 A big part of Galapagos is composed of volcanoes.

These volcanos, once they come into contact with the volcanic hot spot itself, feed off that main source of molten rock until the chamber (along with any crevice, huge crack, etc.) gets filled up. Sometimes, those cracks find no escape, and they start to release molten rock at different elevations and areas of the volcano. Unlike continental volcanos that are often more explosive, gassier and violent, insular volcanoes see their molten rock escape rather gradually. While exploring the islands, guests will get to witness different ages and stages of Galapagos insular volcanos, especially when they choose multiple itineraries. For example, the older and more eroded volcanos in Galapagos are seen aboard our Southern Galapagos Islands itinerary (that visits Española, Santa Fé, Floreana, etc), while the younger ones are seen on our Northern Galapagos Islands itinerary (that visits Fernandina and Isabela Islands, which are home to volcanos: Wolf, Alcedo, Darwin, La Cumbre, etc). A week in the Galapagos can give explorers a chance to see a great and wide diversity of volcanos! 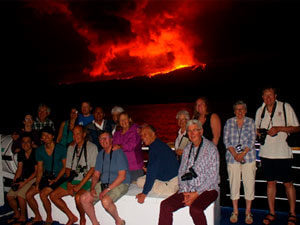 There have been some eruptions in the last few years in the Galapagos. On September 4th, 2017, an eruption occurred at La Cumbre Volcano on Isabela Island. Most recently, Sierra Negra volcano had an eruption on July 6th 2018.

Other importantly recorded eruptions have occurred on Wolf Volcano (Isabela), Sierra Negra, Cerro Azul, Santiago, Marchena. In the case of Wolf Volcano, the oozing lava came down the slopes after a fissure eruption started at around 01h00 on May 25th – an event that lasted several weeks!

An eruption is for sure an exciting moment in the Galapagos Islands. Let us hope that soon enough, more unique experiences like this will get to be witnessed by our guests onboard. Yacht Isabela II gets to explore the most popular places in the archipelago in its northern, southern and western itineraries.