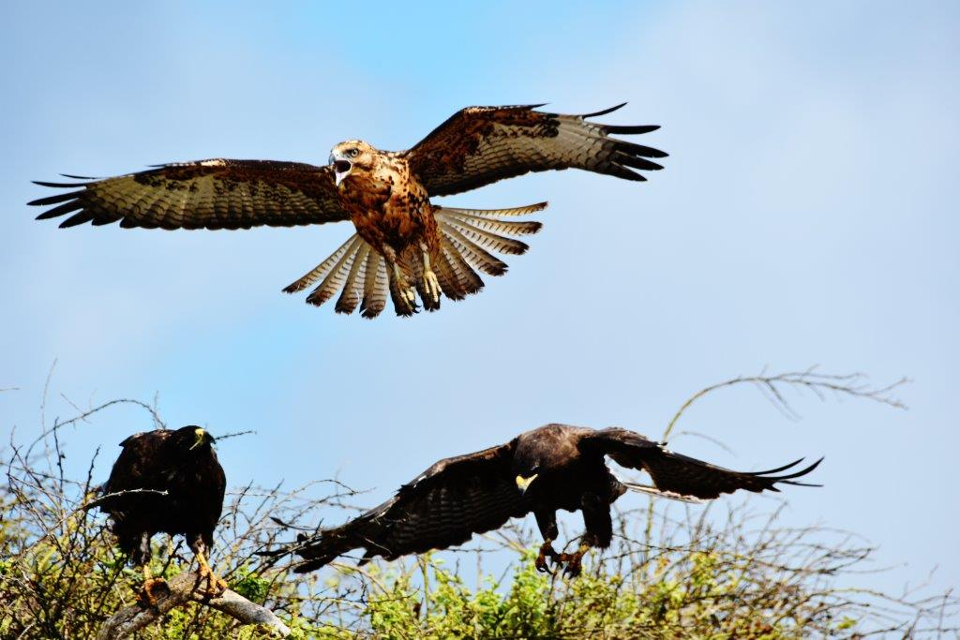 This incident took place today during our visit to Santa Fe Island on Yacht Isabela II’s Central Islands itinerary. We disembarked from the boat sometime around 8:30 in the morning and arrived at the island when, all of a sudden, not all that far from the beach, we found ourselves witnessing a lot of Galapagos hawk activity overhead. As we walked closer to their focus of activity, we discovered that a Galapagos sea lion had just given birth just a few minutes prior to our arrival! Though sea lions and fur seals are often confused, it was unmistakenly a Galapagos Sea Lion. The discarded placenta was sitting there, right beside the mother and her newborn pup. And this is what the Galapagos hawks were after… 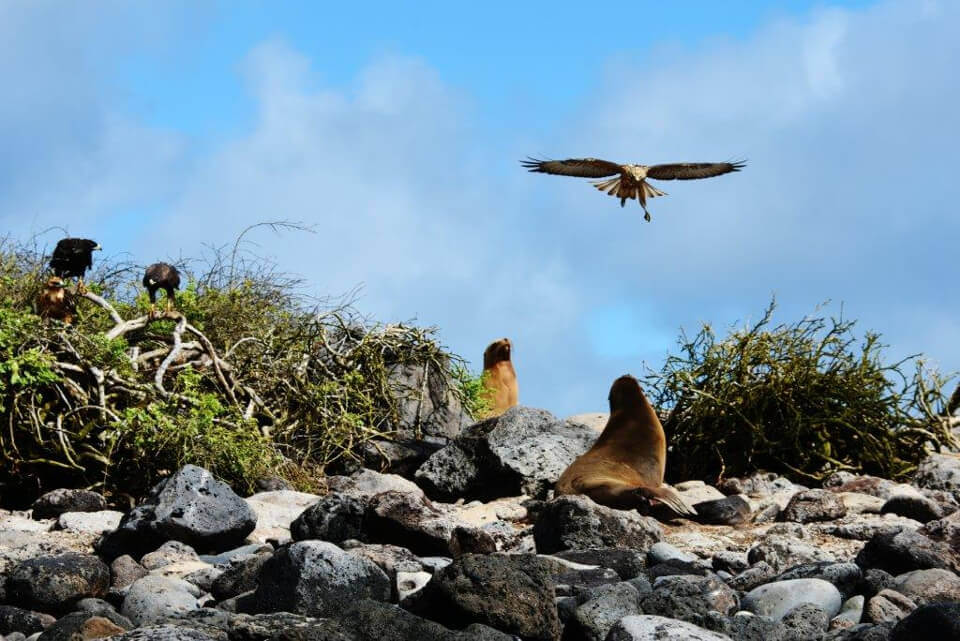 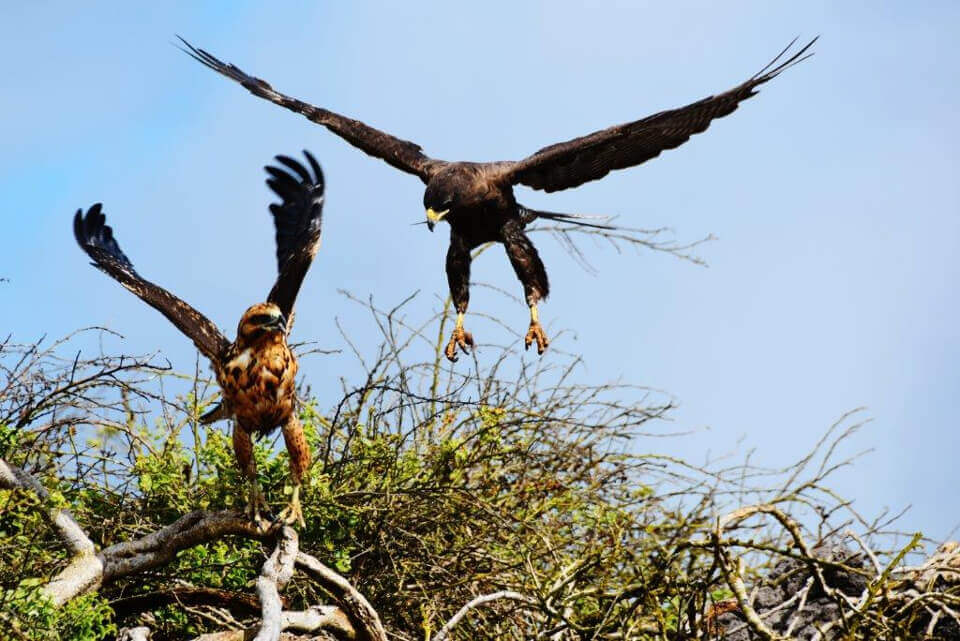 The Galapagos island hawk is one of its endemic species

The Galapagos hawks on this island managed to spot the placenta while they were flying high up above, promptly swooping down to get a closer look at the newborn sea lion pup. The mother sea lion instantly reacted and retaliated against their moves using every means necessary to keep its newborn pup safe. The hawks, meanwhile, didn’t expect such a counterattack on the mother’s behalf and they were completely oblivious to the fact that the mother would defend her pup with her own life, if necessary. Consequently, the hawks weren’t able to get at the placenta that they had their eyes on as easily as they’d first hoped. It was an intense standoff between this mother sea lion vs. hawks in Galapagos! 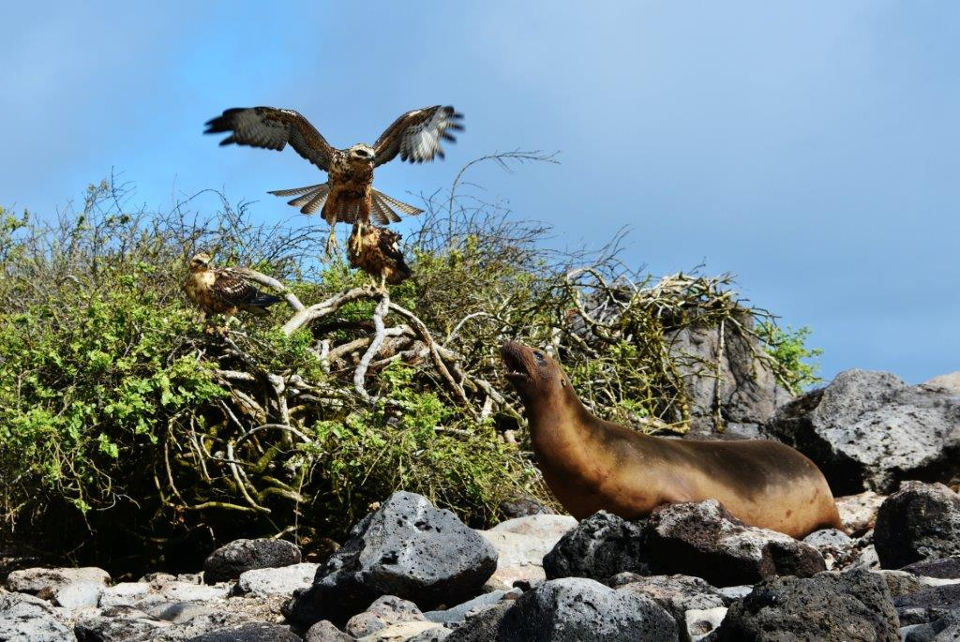 Roughly 30 meters (~100 feet) off to the side were two, savvy adult hawks that were edging closer to the whole scene. Clearly, they were waiting for the mother sea lion to withdraw with her pup so as to avoid conflict, unlike the group of younger Galapagos hawks that didn’t seem to know how to engage. Once the mother sea lion withdrew with her pup, these two adult hawks instantly jumped on the prize and devoured the placenta much to the disappointment of the younger hawks that simply stood around, watching as the adult hawks fed on the placenta, learning their technique. 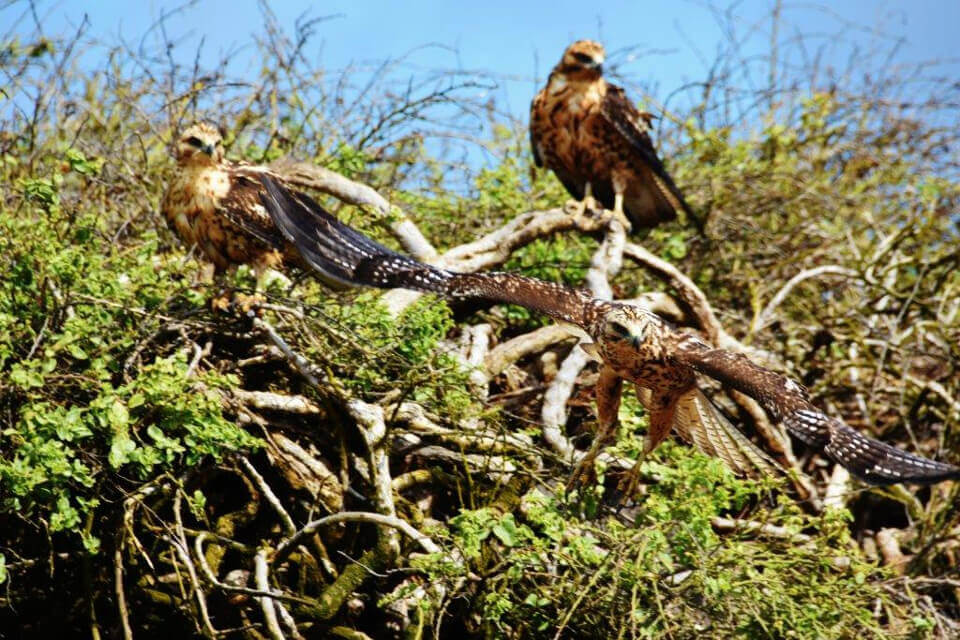 Galapagos hawks are not scavengers – they are birds of prey with very specific hunting methods. The patience that adult hawks put into analyzing a situation so as to avoid spending energy and unnecessary confrontations is key in making them an apex predator in Galapagos. Mature Galapagos hawks know full well how to avoid wasting a chance on a good meal; and this is what the younger, impetuous hawks learned the hard way on this day, during this Galapagos WOW moment. Next time, they probably won’t be so brash in their approach and allow a feeding opportunity to get away from them so easily. They have learned from the older Galapagos hawks. 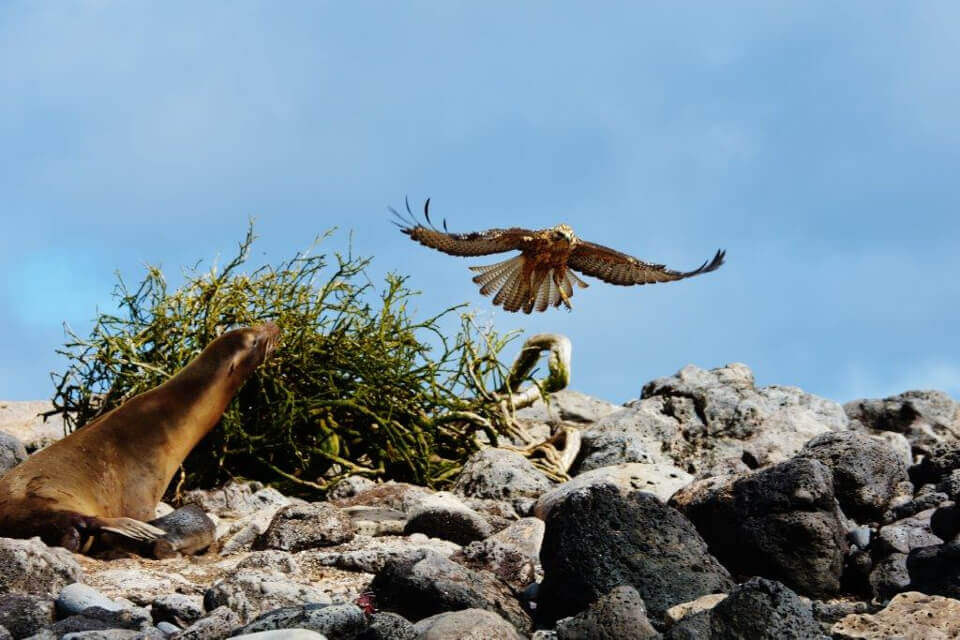 Want to experience this marvelous moment yourself? Be sure to explore our Galapagos Tours!

Galapagos Inspiration: A Bonus Poem from One of Our Guests!

As a little bonus treat to this Galapagos WOW moment, one of our guests aboard the Yacht Isabela II recently wrote about her experience with us. We’d like to make the most of it by sharing her lovely words with all our readers.

Over this week, we have spotted many species indeed,

Many birds, iguanas, turtles and the odd shark,

The scenery is amazing yet somewhat stark.

We have been fed and pampered every day,

With attention to every detail along the way.

The crew of the ship are so friendly and warm,

They even kept us away from the storm.

We have had idyllic weather and Pangas galore.

I ask you my friends, could we have wanted more?

Thanks to the crew of Isabela II,

This experience has taught us to see life anew.

To the captain, the chef and staff what can we say?

Mucho gracias for your efforts each day.

All sorts of food for any taste,

Not a morsel went uneaten, hence no waste.

What a sunset we had crossing the Equator,

Not many sights could have been greater!

We bid you farewell, adieu and goodbye,

We will be heard to utter a sigh,

As we leave Isabela with memories intact,

It may be possible, that we will be back! 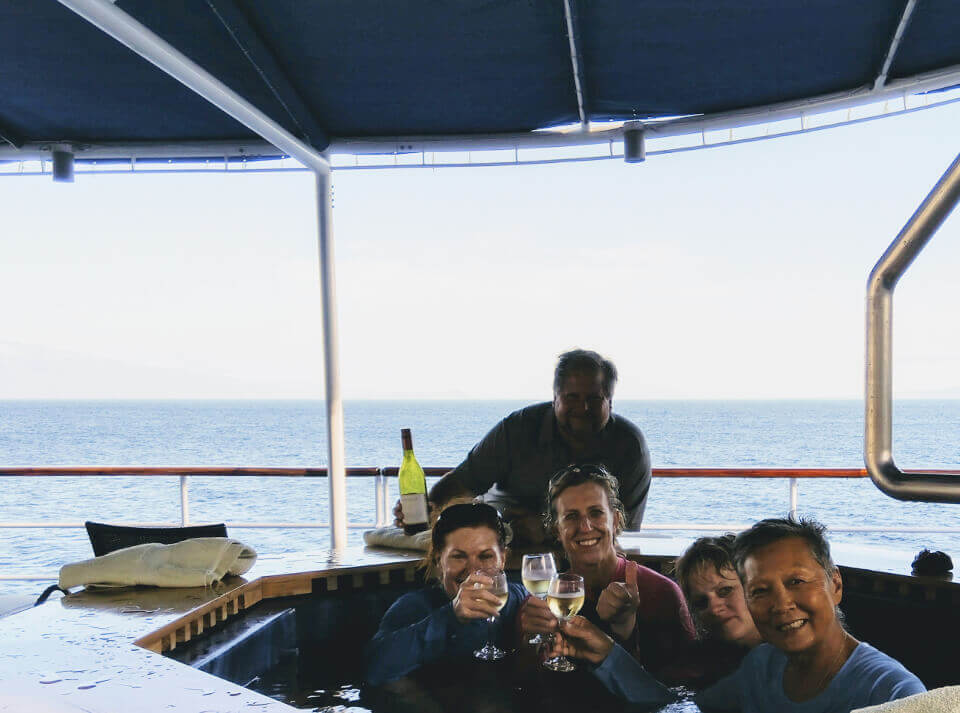 Pictured: Guests relaxing in the hot tub after a fascinating snorkeling excursion over at Punta Vicente Roca in the company of a bunch of sea turtles, penguins, and sea lions. Views of Ecuador Volcano and a nice glass of Chilean Chardonnay were served before crossing the equatorial line and celebrating (pictured below) this event later that same day with a beautiful sunset. 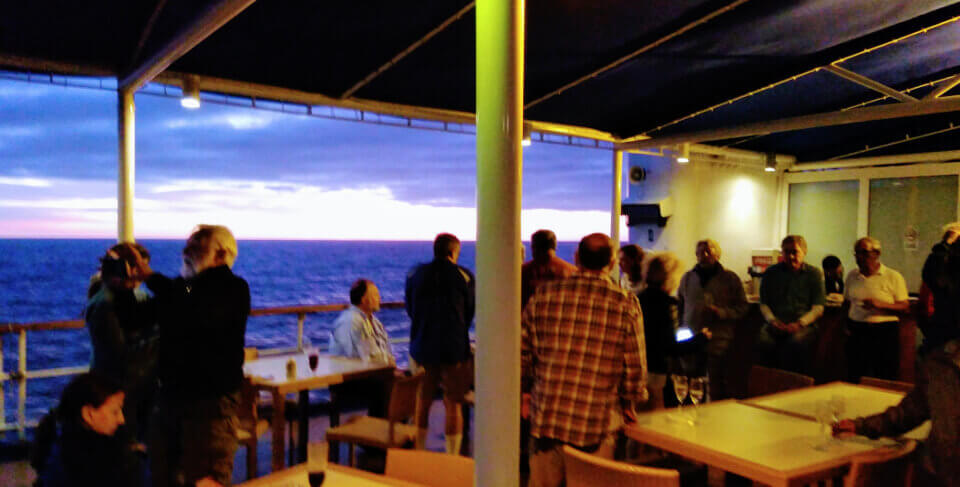 Guests aboard Yacht Isabela II sailing on the sunset