The HMS Beagle ship in the Galapagos Islands

This particular voyage was like no other – and it had Charles Darwin on board!

The Voyage of the HMS Beagle was probably one of the most interesting and unique marine voyages ever accomplished. Not only the fact that Charles Darwin was on board made it unique, but these sea farers were in their mere mid-twenties and got so much accomplished. Let’s start with basics: the HMS Beagle had no connection with a natural history collecting voyage; it was a cartographic expedition in charge of surveying very remote places like Cape Horn, Galápagos Islands, Tahiti, and the seldom visited west coast of South America. In great part, the goal of the voyage was to seek economic feasibility of some destinations, like the Galápagos Islands and their whaling potential for the British economy. The HMS Beagle accomplished three voyages in its incredible maritime history: 1826-1830, 1831-1836 (this one had Charles Darwin on board), and 1837-1843.

Who was Captain Robert Fitzroy and what was his relationship with Charles Darwin? 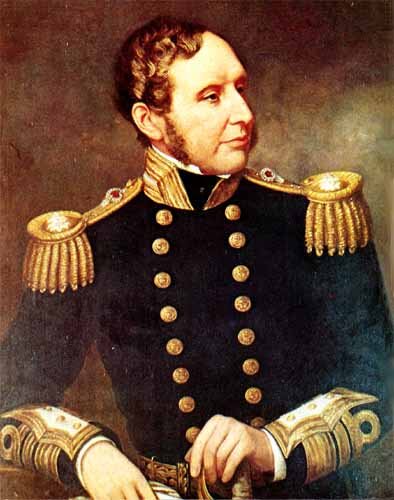 Captain Robert Fitzroy (1805-1865), was a member of the British aristocracy. His father was the 4th great grandson of Charles II of England. His early involvement with the Royal Navy gave him early high responsibilities and being a sharp young mathematician allowed him to be well respected by older Admiralty. Captain Fitzroy was the first student to ever achieve the degree of Lieutenant with 100% full numbers examination, all at the early age of 19. Gradually he became the best scientist in the Royal Navy and mastered his knowledge in the field of Meteorology. In fact, one of his masterpieces is the invention of the Fitzroy Barometer; a device currently used by modern weathermen in forecasting. He was given full command of the HMS Beagle for its 2nd Voyage.
Charles Darwin, a clergyman with a keen interest in Geology and Taxidermy, and a special love for the outdoors, was well connected with friends who also happened to know Captain Fitzroy. This early networking enabled Fitzroy to ask a well-known and highly respected Botanist, John Henslow, for the opportunity of joining him on the 2nd Voyage of the Beagle. It seems Henslow’s wife was responsible for not allowing him on the voyage, and quickly Charles Darwin was suggested as a better fit for the position. Fitzroy and Darwin finally met, they agreed on the un-paid position on board, and due to Darwin’s lack of a Science-related degree, he had to be taken as the Captain’s companion/guest, and not as the official Naturalist of the HMS Beagle.

Five weeks in Galápagos and off to Tahiti!

After leaving the port of Callao in Perú, the Galápagos were reached by the HMS Beagle on September 15, 1835, and after extensive surveying of its islands, islets, rocks, and rugged coastlines, Charles Darwin brought on board huge amounts of cargo including rocks, bones, feathers, skins, some live animals, and hundreds of personal notes. Captain Fitzroy’s mission in the islands had nothing to do with the uniqueness of its wildlife, landscapes, etc, but for Darwin it was a dream come true. While Fitzroy always prompted his survey boats first, Darwin patiently waited until one of the boats will take him and some crew ashore. Altogether, only four islands were explored by Charles Darwin (San Cristóbal, Floreana, Isabela, Santiago), the total amount of time spent ashore was only about two weeks. On October 20, 1835 the HMS Beagle put all its sails up, found a good strong trade wind, and sailed 3,200 miles towards Tahiti.
The power of observation was highly exerted by Darwin, and his conclusions were so deeply founded that his masterpiece Origin of Species was published 23 years after his voyage concluded in 1836. Although Galápagos is a key element for the success of the Voyage, other places were proof of unique adventures and challenges: Cape Verde, Fernando de Noronha, Cape Horn, Mauritius, Tasmania, Ascension, and more. For a deeper understanding of this, we strongly recommend reading: The Voyage of the Beagle, by Charles Robert Darwin.

Relive the amazing journey of Charles Darwin with one of our Galapagos tours!