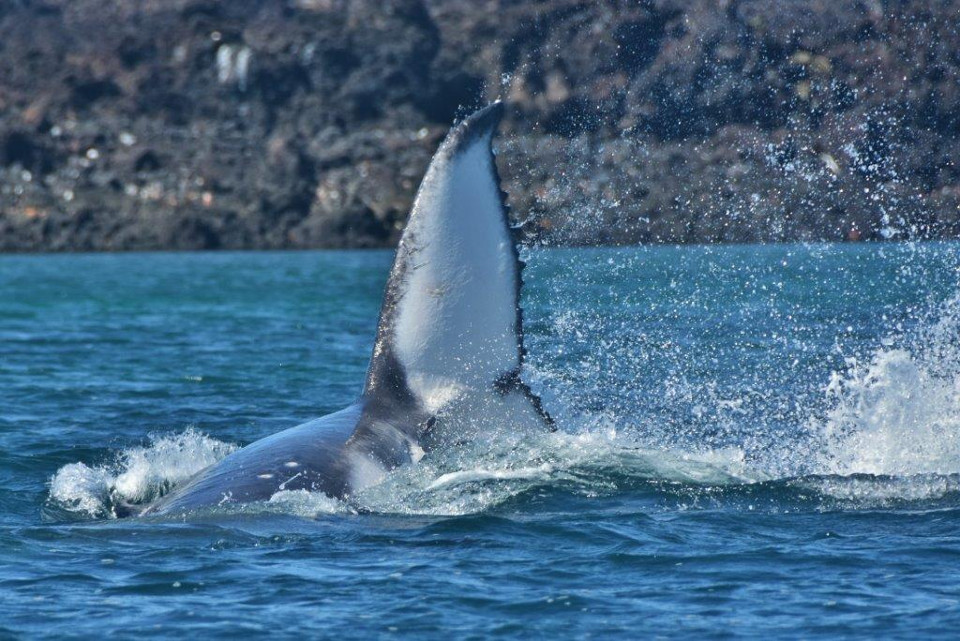 Fernandina is one of the most beautiful visitor sites our guests have the chance to see. Not only because of the impressive shield volcano crowning the background as part of a great piece of dramatic scenery, but also because they get the chance to see some of the rarest Galapagos species such as the flightless cormorant (a Galapagos Big15 species).

There must be very few places in the world where you get the feeling there has been zero human intervention. Or where you’ll find nature and wildlife at its most pristine state. Beautiful Pahoe hoe and Aa lava covers the island and little vegetation – except for some lava cacti, mangroves and endemic shrubs – grow on its still infertile soils. Fernandina is so remote that you can’t help but feel like a true explorer. However, the Galapagos hides surprises around every corner, it seems. Everyday is unique and this day in particular would end up being no different. Little did we know that right before disembarking a surprise of huge proportions would be waiting for us outside our home on the sea, Yacht Isabela II.

Because our crew is always on the lookout for unexpected wildlife coming our way, they saw two majestic-looking mammals off in the distance. A mother humpback whale and its calf were calmly swimming in the safe Galapagos waters. And what a way for our guests to start their visit in Galapagos! Whales at Fernandina Island! 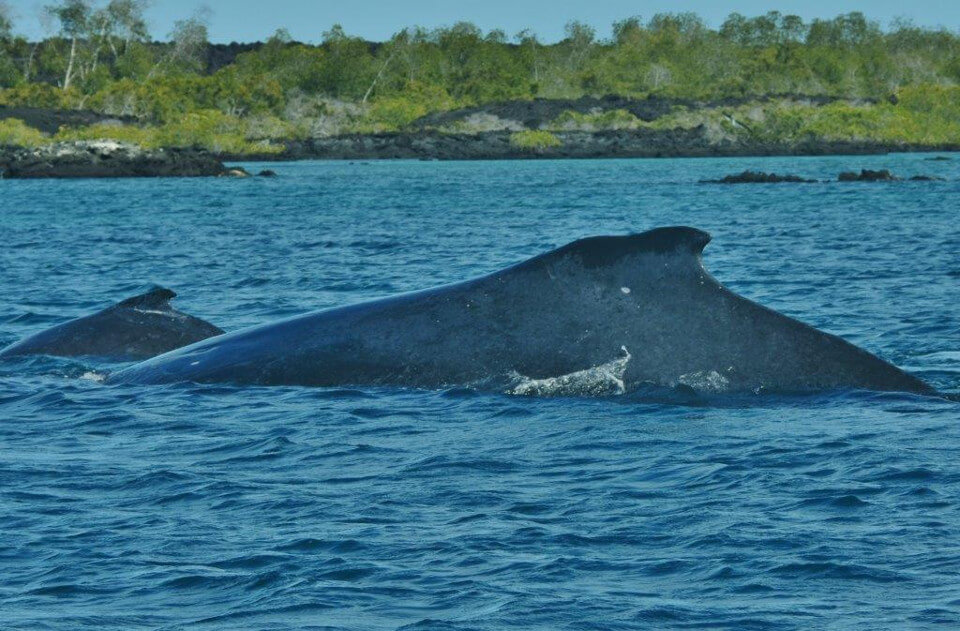 Fernandina, the Youngest Island of Them All

We visit Fernandina on our Northern Islands Itinerary. Fernandina is the westernmost island of the Galapagos archipelago and also happens to be the youngest one. The Galapagos are located on top of a hot mantle plume, which unlike a hot spot, have different patterns of motion beneath the Earth’s crust that follow different tendencies. The archipelago is located on top of a very cracked area of the Nazca plate, over which lava comes out. This is why the Galapagos follow a sort of square pattern and not a line like the archipelago of Hawaii. Hawaii moves northwest with the Pacific plate, as the hot spot remains in the same spot; while in the Galapagos, lava comes out through different cracks while the mantle moves beneath it. Because of its location on the western limit of the archipelago, the Cromwell current (travelling from west to east) crushes against the submarine walls of the islands and heads upstream in what is called an upwelling. This very cold current that comes from the bottom of the ocean is also filled with nourishment. Nutrient-filled water attracts several species such as the humpback whales which, during nursing season, find safety from predators in the rich Galapagos waters. 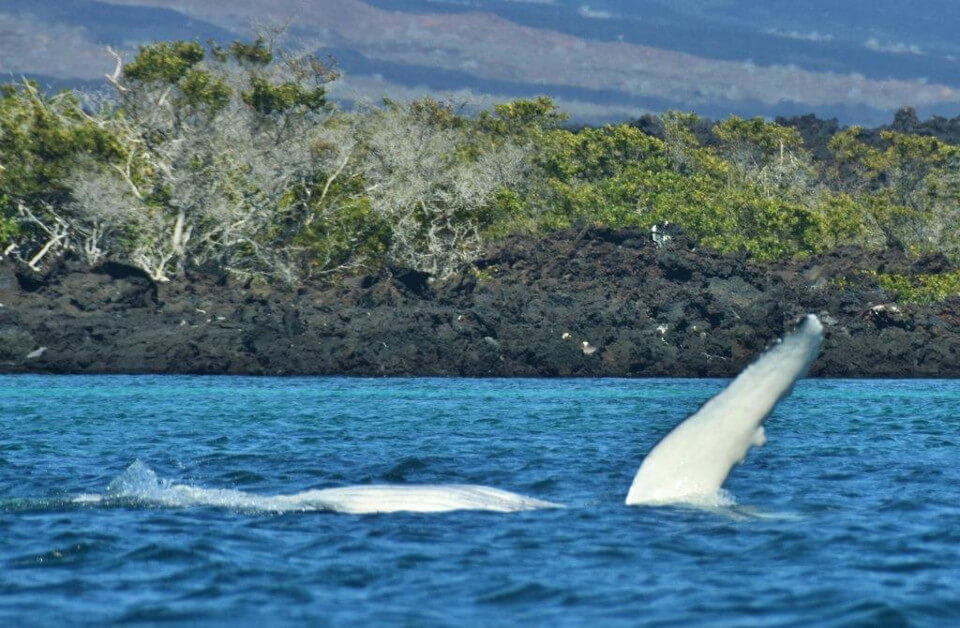 Visit Fernandina for Yourself!

Our guests were finishing Yacht Isabela II’s gourmet breakfast and getting ready for the day’s outing, when suddenly we all got called to the deck. We had a surprise visitor! A mother humpback whale and its new born calf were swimming just 50-metres away from our yacht. Their gentle movements showed us they weren’t really concerned with our presence at all, which is pretty much the same attitude of all wildlife in the Galapagos.

We decided to move quickly and get a closer view of the family. We boarded our dinghies and slowly headed their way. Once all of our guests had a nice view of these beautiful animals, something amazing happened: we were silently following them as they moved to the southern point of the island when the calf decided to marvel us with its first jumps. He started jumping out of the water while its mother showed her fins as if applauding her calf’s achievement! The baby humpback whale must have jumped around six times in two different sets, while aboard our dinghies we watched in awe. There was no cloud to be seen that morning, and a gentle morning breeze rocked our boats as the show that these gorgeous whales had just put on for us was incredible. That moment, while looking at our guests’ surprised and joyous faces, I was sure the memory would be engraved in their hearts forever. And to think, our first day in Fernandina had just begin. 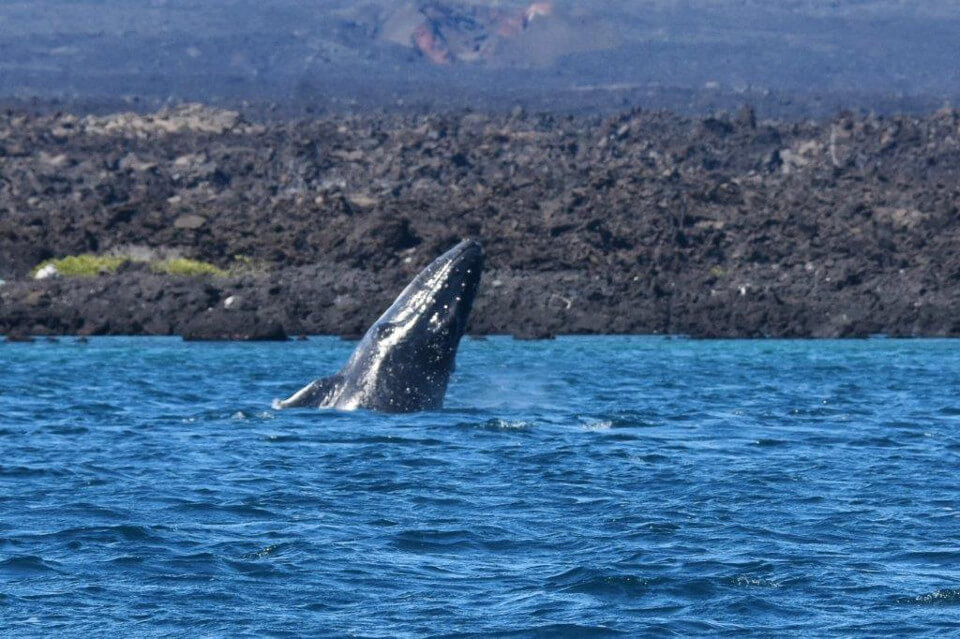