History?s first recorded landing on the Galapagos was documented by Tomas de Berlanga in 1535 and was most notably recorded by Charles Darwin in 1835. The Ecuadorian government eventually designated part of the Galapagos as a wildlife sanctuary in 1935. This later became known as The Galapagos National Park in 1959. In 1978, the Galapagos were named a UNESCO World Heritage Site. Later, in 1986, the Galapagos Marine Reserve was created to protect the surrounding waters.

Conservation methods have always been a top priority for the local Galapagos government. Luckily for them, historical documents have shown that sailors loathed the idea of spending any time on the islands due to the strange types of animals and extreme volcanic activity. Collectively, international organizations and the local and national governments have been able to limit the number of humans allowed in the Galapagos National Park at any given time, thus protecting the flora and fauna from unregulated human interaction.

Given that this region is one of Earth?s veritable hotspots of biodiversity, it?s incredibly sensitive to the presence of humans. The wildlife in the Galapagos archipelago was nearly destroyed in the mid-17th century when whalers started to lay claim to the islands. Hunting, fishing, cutting down forests, and even introducing domesticated animals lead to widespread destruction of the land and its wildlife and vegetation. The sheer number of invasive species forced Galapagos tortoises into an endangered status by 1960, where only 200 adult tortoises were left on Pinzon Island. Since then, over 2,000 tortoises have been reintroduced into the ecosystem, and some introduced species, namely pigs and goats, were removed in 2000 and 2006, respectively. 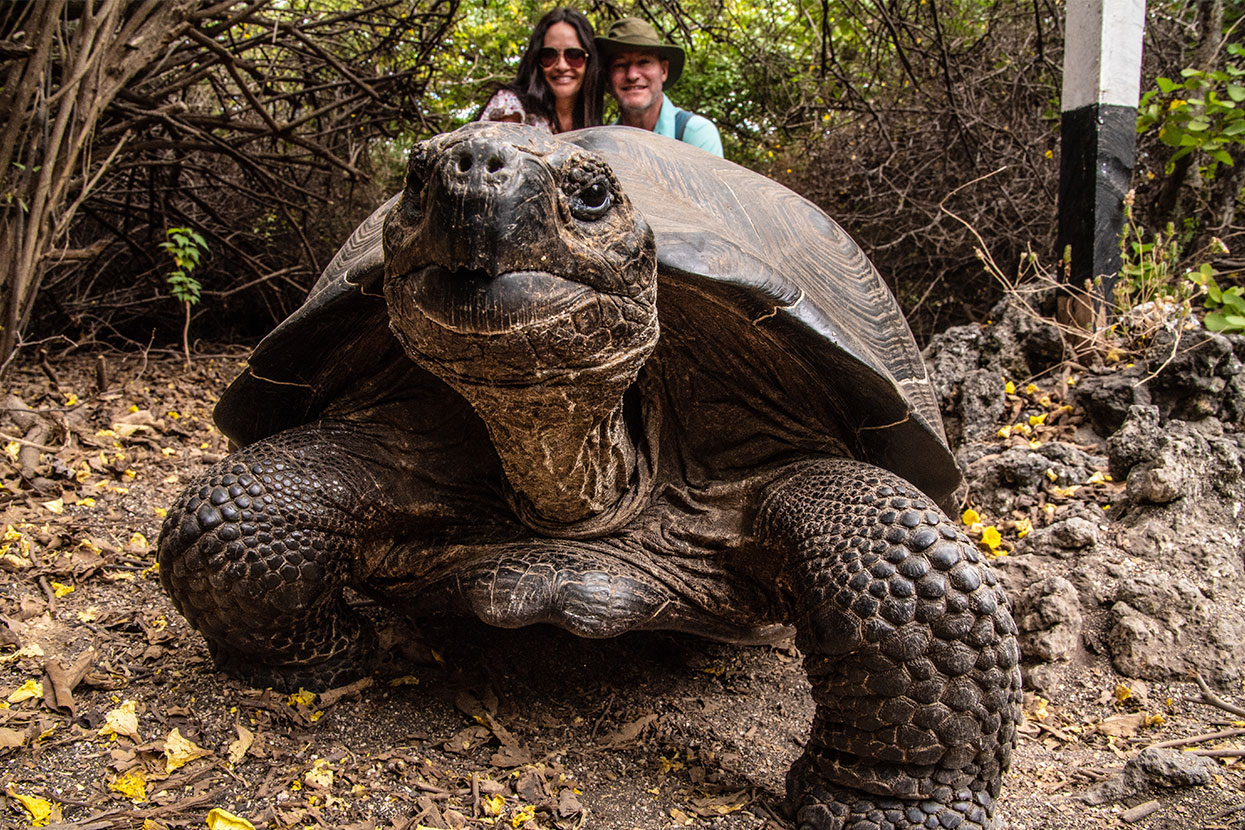 Since humans represent the primary threat to all living things on the Galapagos Islands, affiliated groups work tirelessly with the Ecuadorian government to keep it as pristine as possible. Reserves, parks, and conservatories make up a large portion of the protected area. The influx of human visitors is a double-edged sword for the Galapagos Islands. Do you know how many tourists visit the Galapagos each year? About 160,000. On the other hand, these tourists contribute millions of dollars every year by way of the mandatory national park entry fee. Donations and entrance fees are used to cover research and conservation techniques. By combining these funds with other revenue from visitors, local entities like the National Park can ensure that Galapagos Islands tourism remains focused on conservation, research, education, and sustainability.

Since humans represent the primary threat to all living things on the Galapagos Islands, affiliated groups work tirelessly with the Ecuadorian government to keep it as pristine as possible. Reserves, parks, and conservatories make up a large portion of the protected area. The influx of human visitors is a double-edged sword for the Galapagos Islands. Do you know how many tourists visit the Galapagos each year? About 160,000. On the other hand, these tourists contribute millions of dollars every year by way of the mandatory national park entry fee. Donations and entrance fees are used to cover research and conservation techniques. By combining these funds with other revenue from visitors, local entities like the National Park can ensure that Galapagos Islands tourism remains focused on conservation, research, education, and sustainability.

Now, just because tourism efforts take science and the environment into consideration, doesn?t mean that the islands are stuffy or boring. When considering why you should visit the Galapagos Islands, the next obvious question is ?what can I do in the Galapagos Islands?? The great news is if you happen to enjoy snorkeling, walking along the beach, swimming, hiking, kayaking, paddleboarding, or tooling around in a boat, these are all Galapagos National Park-approved activities. That said, not every expedition vessel offers each of these activities, However, Yacht Isabel II is one that does. You can ask a destination expert about this and any other questions you may have.

In the Galapagos, if you?re looking for the main alpha predator, look no further than the 18- to 23-inch (45- to 58-centimeter) Galapagos Hawk. Humans are normally at the top, but these endemic creatures have never had to deal with the invasive reality of human destruction. In fact, you?re more likely to accidentally step on sunbathing Lava Lizards or trip over a blue-footed booby than have to traverse the islands like Indiana Jones in order to find them.

This is one of the few places on the planet where humans are not considered predators, but instead are just kind of in the way. This lack of an inherent biological fear of humans is yet another unique characteristic of this region. Remember that these islands and islets were never connected to the mainland, and therefore have never been suppressed by external factors. This is why the Scalesia tree in the Galapagos can grow to 30 feet (10 meters) while a daisy in your local park (which is part of the same family) will only grow to a few inches/centimeters. The flightless cormorant, which on paper looks like a failed experiment given its inability to fly, has become one of the premier aquatic predators of certain islands, as it uses its webbed feet to dive towards the ocean floor to feast upon eels, fish, and small octopi.

Keep in mind that not all flora and fauna are exclusive to the Galapagos, although the majority of them are endemic to the archipelago. In fact, an astounding 86% of the 51 reptiles and birds species can only be found in the Galapagos, along with 30% of all native plants. Follow the lead of expert tour guides and try to see every inch of this region. Expedition cruises like those offered aboard Yacht Isabella II Galapagos Cruise have developed a detailed and well-formulated itinerary to track the path of the most sought-after species. And, for many, this type of adventure really is the best way to see the Galapagos. Plus, it also solves the question of where to stay when visiting the archipelago. 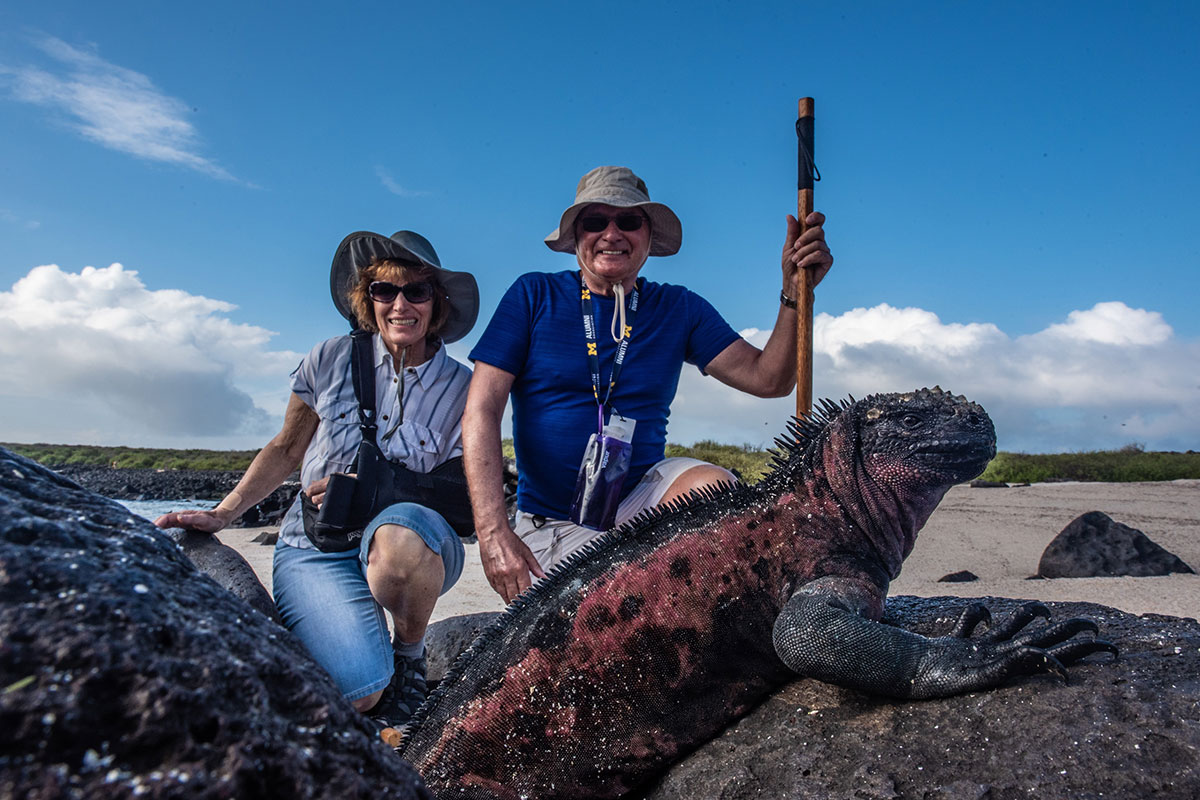 All eastern islands are typically younger while western islands tend to be older (0.7 million years versus 4.2 million years old). With over 145 islands, islets, and rocks that make up the archipelago, it could take a lifetime to visit every inch of this place. Fortunately, companies that organize Galapagos tours have already figured out the hard part for you, offering a full itinerary of destinations and activities allowing you to make the most of your trip. Don?t forget that travel time between islands can take up to 4 hours, so make sure you collaborate with experts to maximize your time.

Galapagos flora has been officially divided into seven unique vegetation zones. The Scalesia, Miconia, and Pampa are better known as ?The Humid Highland Zones.? You will find the most fertile land in all this archipelago here, most of which has been designated for agricultural purposes by the islands? natives. This area is mostly confined to altitudes of 1,000 to 2,000 feet (300 to 600 meters) although there are a handful of islands that reach higher elevations. Crops that commonly grow here include soursop, avocados, papayas, rose apples, and guavas – just to name a few.

The Coastal Zone provides shelter, shade, and safe places for reptiles, birds, and mammals to reproduce. Here is where you?ll usually find most of the ?must-see? animals on the islands.

The Arid Zone, which extends from the shores across the lowlands on the main islands, is lush with the most diverse and extensive flora species, including Palo Santo, cacti, Palo Verde, and acacias. Lava lizards also run amuck here, so be on the lookout!

Of course, the Galapagos Islands do experience a couple of different seasons. From December through May, the hot season brings a fair amount of sunshine and some refreshing showers, almost daily. This is a popular time of year to visit as it really does feel like every day is a terrific day to be exploring outdoors. From June through November, the vegetation changes as we go through more of a dry season. And if you happen to enjoy aquatic activities like snorkeling, this season is terrific for viewing more underwater sea creatures as the waters tend to be nutrient-rich and marine life is quite present and abundant. Also, the weather remains a little cooler, which can mean more comfortable hikes and greater visibility of birds.

It?s not easy to choose when to travel to the Galapagos, but thankfully, a destination expert can help you figure this out. It?s not a matter of whether you can visit the islands, it?s just a matter of when and what you want to see and experience in this remarkable destination. You really should go and enjoy them for yourself! 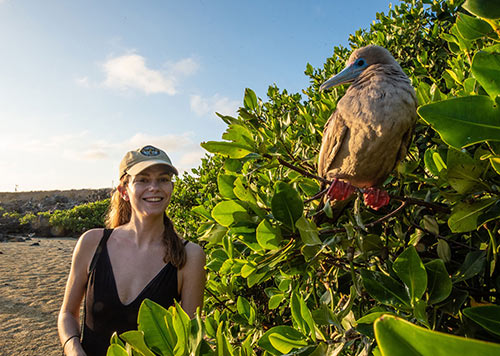 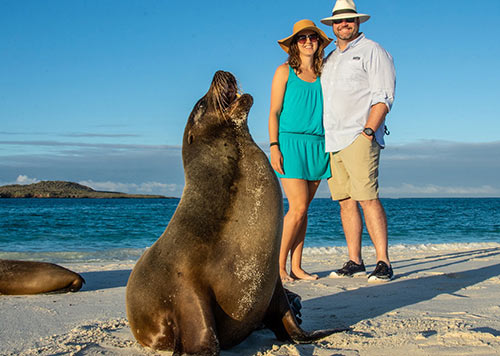 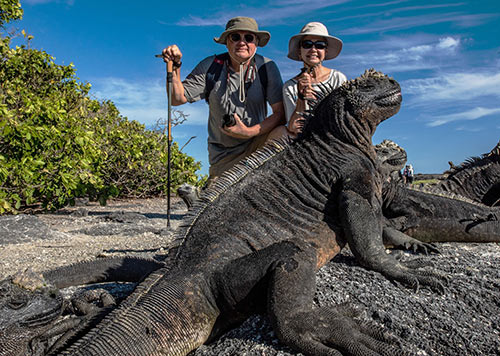 If you?re wondering how to get to the best of a Galapagos Islands’ exploration, we recommend you select a combined package that will provide you the opportunity of visiting more Galapagos iconic landmarks. Get in touch with a destination expert who can answer all of your related questions and help you figure out the details of your trip. It truly is a one-of-a-kind destination.

Lava lizards dominate every island except Darwin, Genovesa, and Wolf. They can be spotted predominately in the lowlands and shoreline areas. Galapagos flamingos, which are a brilliant color of pink due to their crustacean-dominated diet, can be found in saltwater lagoons located not far from the beaches. Galapagos penguins are carnivores, whose diet consists of crustaceans, sardines, and other fish. The islands? natural predators include fur seals, hawks, sea lions, and sharks – so make sure you plan your itinerary accordingly!

Alcedo Volcano, one of the six coalescing shield volcanos, is home to the largest cluster of Galapagos tortoises. Galapagos sea lions, probably one of the friendliest animals on the islands, can be found on pretty much every island. Or if you?re willing to scuba dive or go snorkeling, you?ll find them within arm?s length in the ocean! Sally Lightfoot crabs shimmer like orange metallic pearls, skittering across the black volcanic rocks. They often gather in large groups on Santa Cruz Island. And, of course, blue-footed boobies can be found in various parts of Central and South America. However, more than 70% of their entire population can be found in the mid and southern islands. For some reason yet unknown, they largely avoid the northern islands of the Galapagos archipelago.

The Galapagos Islands also offer indoor points of interest. The Charles Darwin Research Station, for example, is located on Santa Cruz Island within walking distance of Puerto Ayora. Home to international marine and land-based research projects, offices, conference halls, gardens, public library, and a gift shop, this research station has been active since 1959. Most notably, they recently signed another multi-year contract to ensure continued scientific research well into 2041. Additionally, more than 75% of the staff are permanent residents of the Galapagos. If you want to better understand the science behind the beauty of the Galapagos, this is precisely the place to be.

While everything looks calm and tranquil, there is one place that lies in stark contrast to that notion: the Sierra Negra volcano, the most active volcano in the archipelago since 1813. This point of interest is a must-see for most people, even though the most recent eruption was recorded on June 27, 2018. It?s important to remember that you will need a guide for this particular trip, so make sure that your touring company offers one. All that?s left is to either hike the 5.5-mile (8.8-kilometer) trail or take a horseback ride northwest, away from the small village of Santo Tomás. You also have the option to take a taxi, but where?s the adventure in that?