Our journey begins on Santa Cruz Island, where we explore the lush vegetation of the Highlands before venturing down to the world-famous Charles Darwin Research Station. The next day, we take in the panoramic views from Bartolome Island, snorkeling with penguins with luck, before swimming off the white coral sand beach of Sullivan Bay, exploring its dramatic lava field. The next morning takes us to Dragon Hill, home of dusty-yellow land iguanas, and then the volcanic crater at James Bay, following in the steps of Charles Darwin. Heading west, we take to our dinghies to discover the wildlife of Punta Vicente Roca, and later make our way to the youngest island in the archipelago, Fernandina, widely regarded as one of the most pristine environments anywhere on the planet, where life has evolved in its natural state, far from the intervention of man. 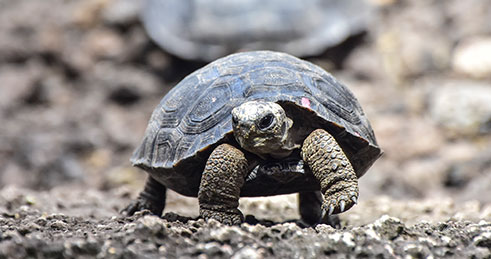 At some Galapagos tortoise breeding centers, you can spot baby giant tortoises.

Baltra Airport (Santa Cruz Island)
After landing at Baltra Airport, we drive to the Itabaca Channel to take a ferry across to Santa Cruz Island. A 30-minute bus ride takes us to a restaurant in the fascinating, more humid Highlands of the island to enjoy lunch, and then continue south down to Puerto Ayora on the coast.

At the eastern end of Puerto Ayora, the largest town in the archipelago, we visit the Charles Darwin Research Station and the Giant Tortoise Breeding Center, the islands’ headquarters for scientific research and conservation. Later in the afternoon, we stroll along the main street of Puerto Ayora before embarking. Captain’s welcome cocktail and dinner. 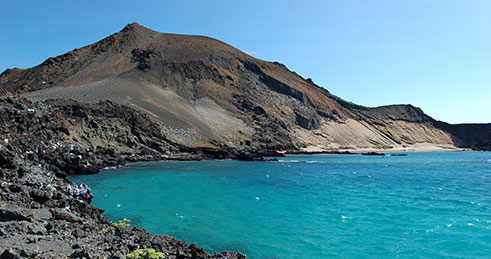 Sullivan Bay is a great place for exploring and swimming!

Bartolome Island
This morning, a Galapagos icon awaits: Bartolome Island. A great way to start the day, with a steep climb up a wooden staircase: the panoramic view from the top is well worth the effort! Following the walk, we take a panga ride around colossal Pinnacle Rock in search of Galapagos penguins and other wildlife.

Sullivan Bay (Santiago Island)
After lunch, we board the pangas (inflatable dinghies) and land at Sullivan Bay on the east coast of Santiago, a white coral sand beach that is ideal for swimming. A trail runs along a lava field that flowed here around 100 years ago. This is the perfect place to see and understand the volcanic origin of the Galapagos. 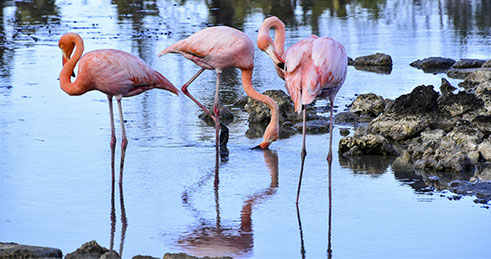 Galapagos flamingos can be easily spotted at Dragon Hill.

Dragon Hill (Santa Cruz Island)
The north coast of Santa Cruz hosts the fascinating landscapes of Dragon Hill. After disembarking, the first part of our walk passes a brackish-water lagoon frequented by shorebirds, ducks, and American flamingos, while further inland, the trail offers a beautiful view of the bay and the western islands of the archipelago, as well as the chance of observing land iguanas (for which the visitor site is named, following a concerted effort to conserve them by the Galapagos National Park). After our walk, we can snorkel from the shore, hoping to spot rays, green turtles, and sharks.

Salt Mine (James Bay, Santiago Island)
Our wet landing on James Bay follows in the footsteps of Charles Darwin. The young naturalist spent about six days exploring this island in 1835, enthralled not only by the species he encountered — finches, mockingbirds, lava lizards, and yellow warblers, as well as Galapagos doves, hawks, and flamingos — but also by the vegetation and the fascinating geological formations. Our hike takes us uphill to one of these for panoramic views: a crater filled with brackish water. The salt from this lagoon was mined in the 20th century, but the businesses didn’t prosper. More active explorers can hike all the way around the cone. 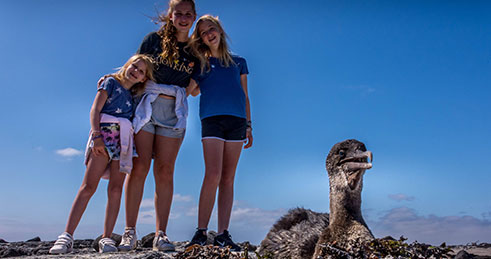 Animals in the Galapagos Islands are generally unafraid of human visitors.

Punta Vicente Roca (Isabela Island)
Since there is no landing site at this location, we explore the captivating coast by dinghy, seeking out abundant wildlife including colonies of Galapagos fur seals, the nesting sites of Nazca boobies, not to mention flightless cormorants, penguins, and marine iguanas. Depending on the conditions of the ocean, we’ll be able to snorkel along the cliffs, hopefully in the company of green sea turtles. Back on board, we navigate along the Bolivar Channel, where nutrient-rich upwellings provide fertile fishing grounds for cetaceans.

Punta Espinoza (Fernandina Island)
We end our journey on a high note, by visiting the island of Fernandina, the youngest island of the archipelago and arguably one of the most pristine ecosystems on the planet. Our visitor site of Punta Espinoza boasts an amazing combination of apparently barren landscapes and abundant wildlife, all dominated by the lofty volcano at the heart of the island. Highlights to spot include hawks, penguins, huge numbers of marine iguanas, and the famous flightless cormorant, with its beguiling blue eyes. 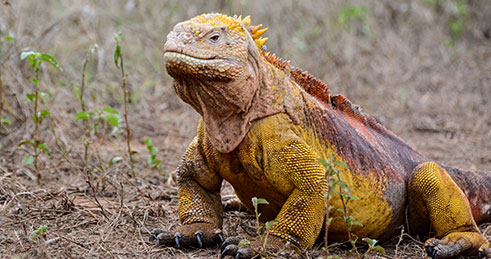 You can recognize land iguanas by its characteristic yellow hue.

Baltra Island
Our journey ends at Baltra Island where we transfer to the airport to take the flight back to the mainland.

*Upon request, airline tickets can be included. Metropolitan Touring guarantees availability of these flights. Airfare is subject to change.

**Upon request, we can include the Galapagos National Park and INGALA Transit Control Card fees (US$100 and US$20 respectively and subject to change without prior notice). However, due to logistical reasons, these fees can only be included when guests travel on the operational departure date and not before.

***Guests may bring their own wine or spirits; however, there is a corkage fee of $25 USD + tax.

*Upon request, airline tickets can be included. Metropolitan Touring guarantees availability of these flights. Airfare is subject to change.

**Upon request, we can include the Galapagos National Park and INGALA Transit Control Card fees (US$100 and US$20 respectively and subject to change without prior notice). However, due to logistical reasons, these fees can only be included when guests travel on the operational departure date and not before.

***Guests may bring their own wine or spirits; however, there is a corkage fee of $25 USD + tax.

Ask us about this package!